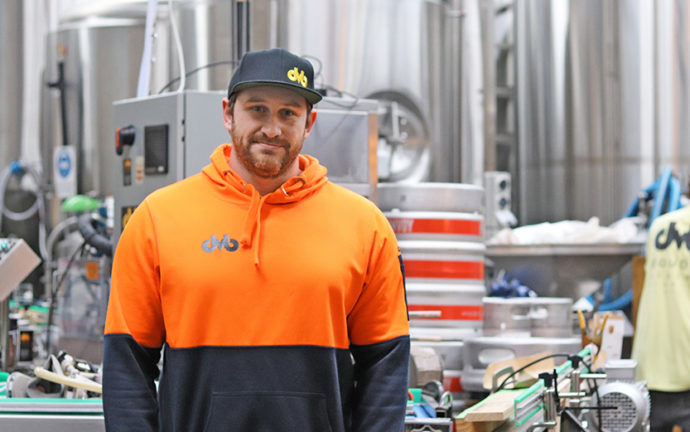 Evarn Flaunty’s early school years weren’t much fun. He is dyslexic and struggled with English and Mathematics but didn’t want to ask for help as he felt that he would be singled out as stupid. As a result, everything he has achieved has been due to his resilience and determination to succeed. Evarn says, “If two people with the same qualifications apply to me for a job, I’ll always take the one with dyslexia – they’ve had to overcome so much.”

He was drawn to the practical subjects at school and Wordwork and Graphic Design were among his favourites. Evarn was a strong swimmer and credits teacher Tremayne Cornish for suggesting that he try water polo. He did, and enjoyed it so much he subsequently represented NZ from the Under 15s through to Senior Men’s competitions.

Evarn says, “The amount of time needed for training and competing just about took over my life during that period.”

On completion of his Bachelor of Industrial Design at Massey University Evarn accepted an internship with a Dutch company, where he worked on projects ranging from medical equipment through to bicycles.

Returning to NZ in 2013, Evarn took a job with Phil and Teds designing baby gear such as buggies and port-a-cots. This was where Evarn met his partner Textile Designer Jane Hills with whom he has toddler Lottie, and it introduced him to colleagues and future brew-buddies Mario Lanz, Warren Drahota and Harry Henrikson. (Scots Collegian Richard Shirtcliffe was also there and is now involved with DVB too.)

It was during a post-work, wind-down drink in 2015 that the four friends had their eureka (brew-eka!) moment. They enjoyed working together but thought they’d done their dash in design and PR. They were brainstorming ideas over a pint when ‘why don’t we brew our own beer?’ gathered momentum and Double Vision Brewery (DVB) was born.

They bought some homebrewing kit and spent every weekend and half their pay making some terrible beer, but also some awesome beer that they thought was good enough to sell. This gave them the confidence to make their first contract brew at the ‘Initiation Brewery’ at Massey University. They made 200 litres in 8 hours, and sold out really quickly. Fast forward to 2021 and they are expanding their own brewery and bar in Miramar, have 13 staff, and produce 2,500 litres every 4 hours.

Evarn credits their success as being due to the support from local businesses and craft beer producers who are all supportive of each other. DVB like to support their community in return, offering their ‘Brew for Good’ beer where $2 from each sale goes to a specified charity. But DVB’s success isn’t really just about support. It’s about teamwork and the resilience and determination of a not very good speller. When asked about any advice for today’s students at Scots, Evarn responds, “Don’t be scared to jump in the deep end, you’ll find your way out”.