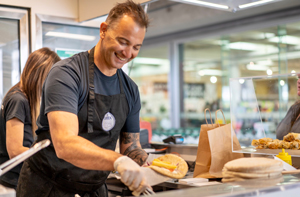 George raves about Scots College. He loved his time there and says the only reason he didn’t stay for high school was because he was sports’ mad and the College wasn’t as strong in that area then as it is now.

For the first few years of his school life George cried nearly every day and would often run away. His family spoke only Greek at home and he struggled to understand his teachers and fellow students. Just when he was making headway, he spent the better part of two years in and out of hospital having treatment for his hip that required steel plates and screws. That set his education back even further and his parents made the decision to send him to Scots.

George says he received so much support and encouragement at Scots, that he caught up with his peers and was up and running in no time. In fact, it was soon his peers who were literally running to catch up with him. Despite the issues with his hip, he was a cross country runner, played cricket, rugby, soccer, tennis and table tennis, was a NZ age group swimming champion and represented NZ at Water Polo.

He made many friends at Scots and they meet up as a group as often as their busy lives allow. 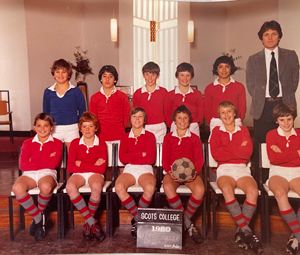 1980 Soccor team, George is far left in the front row

George’s parents owned various well-known Wellington venues of their time, such as the Savoy Coffee Lounge on The Terrace and the Oriental Tea Rooms. It was there that George and his brother Staphy (also a Collegian [1975-1983]) earned their stripes in hospitality. So much so, that aged 15 and 18 respectively, they opened and successfully ran their own sandwich bar ‘Jazz’.

This was the start of George’s food journey, and since then he has run numerous successful cafes, and built up an impressive property portfolio too, buying his first rental property aged 21. However, his adult life has not been without its challenges and he lost everything in 2011 when a joint venture turned sour. At the same time his marriage to his wife Penny, ended, and his two boys Petrie and Marcos needed more of his time.

Ten years later, and George’s life is trucking along merrily. George’s partner Sophie Kasyolids having lived in Santorini, Greece, loved the souvlaki street food there, and persuaded George that it would be a success here too. She was right, and they now run two Greek Food Trucks and a permanent pod at Moore Wilsons. George’s eldest son Petrie runs the second truck and has recently made George a very proud grandfather. Petrie’s daughter turns one this week and George and Sophie take delight in looking after her. George says he wasn’t able to send his sons to Scots but now that it’s co-ed perhaps his granddaughter will go.