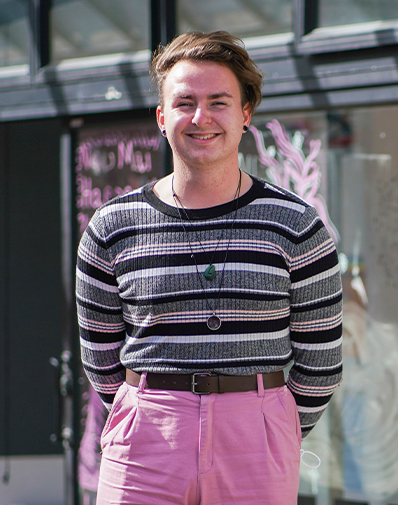 Our lives are fuelled by change. Changes in our world views, careers, social circles, our identity and our expression of who we are. For youth, as they navigate the changes in their identity, social norms can interfere with their desire to openly express themselves. The importance of having guidance from someone who encourages this expression is of high value. Enter Sean Tholen, who is endearingly referred to as Kaiako by their students and who, alongside their teaching, is striving to show students how they can live to their fullest potential. Sean is non-binary and uses they/them pronouns.

While at Scots, Sean was a prefect, a rower and a member of the 1st XV rugby team that won the National title for the first time alongside Hamilton BHS, an historic moment for Scots.

Following their life beyond Scots, Sean’s experience cultivated an abundance of skill and integrity that they bring to their teaching here at Scots. Sean was accepted to complete a masters degree with Ako Mātātupu, Teach First NZ. Here, the students are sponsored to study while teaching full time at a low decile school. For two years Sean taught at Tangaroa College in Auckland, which shed light upon the difficulties that some families face.

Following this experience, Sean went on to teach at a trailblazing Te Ao
Māori school in Hamilton, specialising in physics and science, where they developed their understanding and use of Te Reo Māori. Sean highlights the time they made solar panels after studying the sun and the application of nature’s teachings to the field of biomimicry.

Positive role models are integral within the schooling environment for the healthy development of student’s wellbeing. Sean’s reflection of their schooling identified that they would like to be the role model they didn’t have – one that openly expressed their alliance towards the LGBTQ+ community. During their time at Scots, Sean describes that it was tough, and ‘it was a place that you either conform to being a man or drown’. However, Sean was encouraged by Giles Moiser, instilling within them the knowledge that they are clever and capable. Sue Esterman, the librarian, also provided a safe space for Sean to escape the often toxic environment of the ‘boys club’, for which they are grateful.

Being a Collegian of Scots, Sean is able to see the school from both a staff and student perspective. Having spent seven years roaming the grounds of Scots, Sean knows the school back to front, and never gets lost. It is only feasible that Sean will help others find their way too.